YOUR INTENSIVE CARE HOTLINE - My Dad Gets Too Much Sedatives In the ICU. Will He Still Wake Up from an Induced Coma?

My Dad is on a Ventilator with COVID Pneumonia in ICU & is on Paralytics for a Month Now. Will He Ever Get Up & Recover?

In this week’s episode of “YOUR QUESTIONS ANSWERED”  I want to answer questions from one of my clients Rosie, as part of my 1:1 consulting and advocacy service!  Rosie’s dad is with a tracheostomy and is on a ventilator in the ICU. Rosie asks if her dad will still wake up if the ICU team is giving her dad too much sedatives.

My Dad Gets Too Much Sedatives In the ICU. Will He Still Wake Up from an Induced Coma? 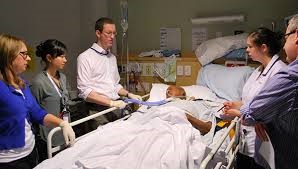 Patrik: I’ve never seen that, never heard of it. Worked in ICU for 20 years I’ve never, yeah Nimbex sure, a common drug, last resort drug, temporary. Why is it-

Linda: That’s what they told us.

Rosie: He’s been on it for a whole month.

Patrik: Cool. What happens if-

Rosie: He kept on having this synchrony when they would get him off of it and they keep him back on it.

Rosie: That’s been the whole thing all the way through.

June:  So they attempted to take it off two weeks ago, two separate occasions. But at that time he was still intubated.

Patrik: What is he now? He’s not intubated?

June:   Yeah so when he was intubated I don’t think he could tolerate the breathing tube when they were taking off the Nimbex. So maybe that was also a factor at the time that he couldn’t be taken of the Nimbex because the discomfort from the throat, no?

Patrik: No, not really. Look with the ARDS has he been in prone position?

June:  They’ve proned in the past I don’t think lately he has been proned no.

Patrik: When was the last time he has been proned?

June: Probably a couple of weeks.

Linda: They said they’re doing it very sparsely because I think one of the doctors we had brought it up a few times and he said with his because obviously at that time he was intubated still with the ventilator, they said it’s a whole orchestration-

Linda: … and they definitely don’t have. He said there are some patients that would benefit more than the others from it so what they were saying is they do it a little bit sideways a few times they’ve done it but not consistently.

Patrik:  Okay, what about ECMO? Have you heard of ECMO?

June: His PEEP is five.

June: So you know I don’t know if he needs an ECMO, that’s basically a lung bypass right?

Patrik: Okay well just looking at the numbers a PEEP of five Fi02 of 40 doesn’t sound too bad. What happens if they took off the Nimbex though would those numbers change? I would argue they would.

Patrik: Right. Do you know what they change to?

June:  But you know he starts breathing faster.

Linda: Over the ventilator.

June: He starts coughing. Maybe he’s thinking he’s drowning because it’s probably a lot of fluids still because he has edema everywhere.

Patrik:  Is he on dialysis?

June:  No. They’re giving him Lasix to drain him out currently. The problem is they haven’t been very consistent with the Lasix so at times he falls behind and then it starts building up again. So, right now again they’re using Lasix. He speed maybe almost three liters yesterday.

June: So he might even pee another three liters today, total in 24 hours.

Patrik: Okay, why do they think he’s fluid overload? And have they given you … Is his heart, does he have a heart condition?

June: So you know the doctor said, his kidneys is probably 60 to 70% clear right?

June: So it could be that is the reason. Also he’s malnourished right now.

June: His gut has only been taken in so much maybe 20%, 30%. So, for the last months, he’s been malnourished. So now the new doctor wants to put him on what did they call it?

Linda: TPN. Yeah and you know for the fluids we asked them this question today, is how much fluid intake is he having. Because now we know the output, so he said before, a few weeks ago they were giving him about 2.5 liters of IV and all of that stuff and then now he said that he’s down to about one liter a day. But then he cautioned us that with the TPN, his intake will go up again because it’s like a feeding tube like IV right?

Patrik: Yeah no he’s not obese.

Patrik: Yeah sure. Okay, I’m not surprised he’s malnourished because on the Nimbex because it’s a paralyzed agent, the gut mortality slows down and he can’t absorb feeds because he’s basically not digesting because the gut’s paralyzed, everything’s paralyzed right? I am surprised the TPN should have come in-

Patrik:  … a few days into the Nimbex.

June: So this new doctor, he just got a new doctor this week. He is more experienced, the last ones are very young and they were just taking day by day firefighting each day. This new one has some sort of a plan and he’s more experienced. So, TPN right away.

Linda: Yeah get him stable on the ventilator without Nimbex and more intubation.

June: So he wants to get him off Nimbex and that’s to priority, okay?

Patrik: It needs to be top priority.

June:  So he’s going to give him another sedative. At first, he’s mentioned Haldol

June: So you said-

Patrik:  Is it ativan or?

June: No not ativan.

June: So he’s going to add a third one to make sure he’s even more sedated. He mentioned haldol but then later called me with something called Salpril, I haven’t heard of that.

Patrik: I’ve not heard of it but it probably might be generic name, how do you spell that?

June: You know I wish I took the spelling I just went based off his pronunciation and wrote it down but I can’t find it on the internet.

Patrik:  Okay hang on, just give me one second. I just quickly need to google it myself. I have not heard of it. They didn’t mention-

June:  He said it’s in the same class of drugs as haldol.

Patrik:   Okay. Can I just say, haldol is not a sedative. Haldol is an antipsychotic medication. If you google haldol-

Patrik: … it will tell you, it’s an antipsychotic medication. It’s definitely not a sedative. I would assume your dad doesn’t have a mental health issue?

June: He suffers from depression.

Patrik: Right okay but Haloperidol it’s an antipsychotic drug. Did you say salpril?

June:  Salpril. So he’s not going to use-

June: … haldol anymore he said salpril he changed his mind.

June: He said Haldol had some side effects like sometimes you would get a fever.

Patrik: Right, yeah, I don’t like haldol. How much-

June:  But he would use it as a step to help him get off –

Linda: So I know it’s says four, it says fentanyl I wrote 400 dose of fentanyl.

Patrik:  He would be having-

Patrik:  He’s been having that basically for weeks.

June: For a month.

Patrik:  Okay and he thinks that just by adding in the Salpril that would be enough to get the Nimbex off is that what he thinks?

June:  That’s what he thinks. You know he’s-

Linda:  To wean him off.

June:  He said he’s had several patients like this in this situation.

June: So he’s not his first rodeo from the way he made it sound.

June: So the other doctors to be honest, I think they’re just young and inexperienced. But this one at least has a vision to where to take him.

June: Even though it’s maybe a little risky which we have to take risk right now.

Patrik: Of course well he needs to get off the Nimbex. How big is this ICU how many is this a big hospital? Is it a small hospital?

June:   It’s a massive company with many hospitals.

Linda:  … overflow unit. Maybe I don’t know. Maybe Sarah knows, Sarah do you have an idea of how big the ICU’s are?

Patrik:  The reason I’m asking how big the ICU is, because I’m well aware that all ICUs are having makeshift ICUs at the moment because of the demand. But let’s just say during normal times this is a five bed ICU which would be really small okay? I would argue any ICU less than 10 beds is a small ICU, okay. Small ICUs generally speaking deal with less critical patients, with fewer critical patients. They are still dealing with critical patients. But you know you look at a big metropolitan ICU 30, 40, 50 beds they have exposure to ARDS all year round, irrespective of COVID.

My Mom is in the ICU for Pneumonia. Will an Increase in Intra-Abdominal Pressure Make My Mom More Critically Ill?

My Dad is in ICU and has been Weaned Off Sedation. How Long Does it Take for Him to Wake Up After an Induced Coma?

MY PARTNER WITH COVID-19 IS OFF ECMO IN ICU BUT WHY HE’S NOT WAKING UP FROM THE INDUCED COMA?

My Sister is on Sedation and on a Ventilator for Three Weeks Now in ICU. Can We Just Take Care of Our Sister at Home?

Why Can’t the ICU Team Wean My Dad Off the Ventilator Before Rushing Into a Tracheostomy? 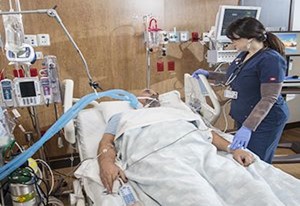 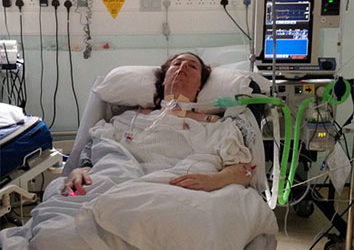 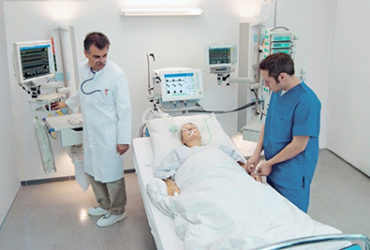