YOUR INTENSIVE CARE HOTLINE - How Can I Have Power Over the Doctor’s Decision to Transfer My Dad from ICU to LTAC?

My Dad is in ICU on a Ventilator. What Are the Important Questions To Ask During Family Meetings in ICU?

In this week’s episode of “YOUR QUESTIONS ANSWERED” I want to answer questions from one of my clients Francia, as part of my 1:1 consulting and advocacy service! Francia’s dad is with a tracheostomy and is on a ventilator in ICU. Francia is asking how she can dominate over the doctor’s decision to transfer her dad to LTAC.

How Can I Have Power Over the Doctor’s Decision to Transfer My Dad from ICU to LTAC? 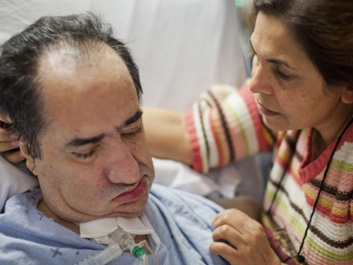 Patrik: Hi, how can I help you?

Francia: Yeah. Hello. My dad has been admitted in the hospital since end of last year. He has multiple sclerosis. He’s been bedridden. What happened was he developed pneumonia at home, so he got admitted to the hospital. He was on the ventilator overnight. They extubated him, and he got discharged to the second floor, and they had to give him morphine because he had nerve pain. And since then, they re-intubated him three times, then he ended up with a tracheostomy and PEG now. And he’s currently not in the ICU. He’s on the 2nd floor of this hospital but they want to discharge him to an LTAC or an SNF, a skilled nursing facility.

Patrik: Okay. So when was the trach done?

Francia: His insurer got him covered in the hospital, and we haven’t agreed to transfer him to an LTAC because we believe that at the current hospital, it’s better care than if he were to go to an LTAC.

Patrik: And so far, you basically asked them to keep him where he is, and that was successful so far.

Francia: Yes. The insurance said they’ll cover his stay at the hospital indefinitely for as long as it need to be, but the hospital wants to transfer him over.

Patrik: Right. They want the bed. Okay. What’s the progress for your dad? Is he having time off the ventilator?

Francia: He’s doing weaning on CPAP. He’s been doing eight hours a day, but he’s not doing great. He was doing 24-hour weaning trials a month ago.

Francia: He got a procedure where they take mucus out of your chest and lungs. And after that procedure and a round of IV antibiotics, he hasn’t been doing great on CPAP, but he has been doing better the past week for more than eight hours, but he said it’s hard to breathe right now.

Patrik: Right. I see. Excuse me. Your dad doesn’t have COVID, does he?

Francia: No. He had rhinovirus. Originally, he had rhinovirus. That’s what he came in with. He just couldn’t cough up the mucus, I guess, because of the multiple sclerosis. He was just weakened too a little bit from, he was dieting for, I don’t know, it was a stupid decision, but he was weakened. Yeah.

Patrik: I see. And is he still breathing on CPAP or is he in a different ventilation mode at the moment?

Francia: He was on CPAP today. I believe they take him off of CPAP during the night because I think he hyperventilates after too long on it, but they’ve been trying to wean him on it every day on CPAP.

Francia: And also, an important point to make, he has intense sciatica nerve pain, so this whole time, he’s been on opiates that he’s been in the hospital.

Patrik: What is he getting? Do you know what opiates he’s getting?

Francia: Well, right now, he’s getting oxycodone, but in ICU, throughout the whole time, he was on fentanyl 200 micrograms, IV in ICU, on the ventilator. He was on oxycodone. He was on methadone.

Francia: He’s a little man. He’s 120 pounds, but he has intense sciatica pain. It doesn’t seem to help, even though they’re giving him the opiates. It doesn’t really help.

Patrik: No. When you’re saying he was on CPAP today, how many hours?

Francia: Today was about, I think, nine hours they had him on, and they put him back on the regular setting.

Patrik: Right. And what are the regular settings? Do you know?

Francia: It was at 30 a few days ago. They put it up to 40. I don’t know why. I guess maybe to see if he could breathe better. And I don’t really know other than that, specific-

Patrik: It would be important to find out what settings he is on besides when he’s not on CPAP. When he’s on CPAP, have they ever managed to get him off the CPAP even? Was he breathing without the CPAP, without the ventilator at all?

Francia: Not since he got the trach, no.

Francia: When he was in ICU, when they extubated him the second time, he was on oxygen again, but then they had to re-intubate him.

Patrik: Right. Is your dad getting mobilized? Is he getting out of bed?

Francia: He was bedridden at home. He’s been bedridden for two years.

Francia: That’s partly to do because of the sciatica pain because he didn’t want to get in the scooter because it hurts a lot, but-

Patrik: Yeah. I see. He couldn’t even sit in a recliner chair. That’s too uncomfortable, is it?

Francia: He could. He could at home. I believe they did try to get him in a chair while he was in ICU just to sit him up, but it’s very difficult.

Patrik: Why do they not want to do physical therapy? Why not? Do you know?

Francia: They’re saying that since it’s an acute hospital, they want to transfer him over to the SNF to do that kind of stuff. I’ve been saying, “Why don’t you do physical therapy more often?

Patrik: It is a no-brainer. Okay. How old is your dad?

Patrik: That would have been my next question. How is he mentally? Is he not depressed?

Patrik: Sure. Okay. Any other medical issues? Does he have heart issues, kidney issues, or liver issues?

Francia: No. He has thalassemia. He received about a dozen blood transfusions in the hospital.

Francia: That’s been going … Now, I don’t know. At home, his blood tests were good. No other medications besides morphine. He was on 30 milligrams. He was going on 15 at home. No medications though. And yeah, he’s on, Jevity at the hospital too regarding her nutrition, the PEG. So I don’t know if that’s contributing to what’s going on with his hemoglobin and everything else, but he does have thalassemia. He was diagnosed with the minor.

Patrik: Can you say that again? What was he diagnosed with?

Patrik: Thalassemia. Oh, got it. Yeah, it is a blood disorder involving lower than normal amounts of an oxygen carrying protein. So he’s been getting red blood cells.

Francia: He’s been getting blood transfusions in the hospital. Before that, he never got one. His sister has it. His sister’s daughter has it. So it’s a genetic trait.

My Mom is in the ICU for Community Acquired Pneumonia. Will The Infection in Her Blood Lessen Her Chance of Living?

My Brother is Brain Dead in the ICU. Is it True that if a Patient is Legally Dead, Then His/Her Preference of Living Will Does Not Matter?

The ICU Doctor Hopes for My Brother’s Life to End. Help!

My Dad is Admitted in ICU Due to Pneumonia and Sepsis. How Do We Move Forward with my Dad’s Care?

The ICU Doctor Can’t Explain the Reason Why My Sister Has Congestive Heart Failure. Help! 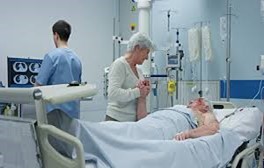 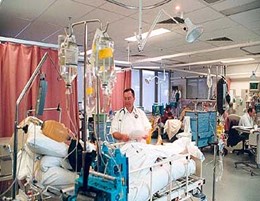 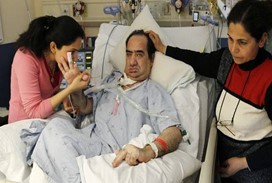