YOUR INTENSIVE CARE HOTLINE - My Dad in ICU is only having pneumonia. Why does the ICU team tell me that he has end-stage renal disease now?

My Dad In ICU Is Having End- Stage Renal Disease! Why Has The ICU Team Not Informed Me Earlier?

In this week’s episode of “YOUR QUESTIONS ANSWERED“, I want to answer the questions from one of  my clients Peter, as part of my 1:1 consulting and advocacy service, telling that his Dad came only with pneumonia, but now the ICU team is telling he has end-stage renal disease.

My Dad in ICU is only having pneumonia. Why does the ICU team tell me that he has end-stage renal disease now?

“You can also check out previous 1:1 consulting and advocacy session with me and Peter here.”

Peter:   So maybe that’s helping him too.

Peter:   Keppra has the side effect of sleeping.

Peter:   But he’s still got some junk in his lungs and stuff, that they’re suctioning out.

Patrik:    No. They do still suction him?

Patrik:   Right. And how is he tolerating that?

Peter:   Oh, he’s okay. It takes a little bit to get him to gag, to get a cough reflex, you know.

Peter:    But my concern is just he’s not urinating.

Peter:   He’s never had that problem, ever.

Peter:   No, they’ve been doing the mouth, yeah.

Peter:   The nose is a little bit too risky for … They do as needed, like if he was really … If he’s desaturating then they do that. Right now, I’m looking at the monitor. He’s on a, what do you call it? They’re giving him a nebulizer treatment, so he’s at 100, right now.

Patrik:    Right, well, yes and no, but the nebulizer will clear, hopefully will clear his lungs. Basically, what a nebulizer does, is if he’s got secretions on his chest that are hard to mobilize, that will help him to get rid of those secretions. It will also make it easier-

Patrik:    Right. So you know what a sinus rhythm is. That’s really good. Not many people do.

Peter:   And I worked in a dialysis unit for 15 years.

Peter:   I’m a little bit up on the dialysis, and I hope he don’t end up on dialysis next. This is …

Patrik:    Well, let’s talk about kidney failure for a moment.

So what will happen is, if they’re giving the furosemide and he’s not weeing, he needs to have dialysis. Now, there would probably be a number of reasons how to go about that. Number one, he might go back into ICU, or they might have a dialysis unit in this hospital. I wouldn’t know whether that’s-

You see, when we were talking about this yesterday … I think going into ICU on the one hand, yes, because he’s getting better care. On the other hand, the biggest risk of going back to ICU is probably the infection risk, right?

Have you seen this before, where people start … They say they gave him … His blood pressure went low in the ICU, so they gave him a lot of fluids. Now all those fluids are hanging all around him, and then sometimes they gave him 40 milligrams of what’s that stuff? Lasix, yesterday. The second day they gave him 40. He was never on 40. He gets 20, safely.

Peter:   And they say that the Lasix caused this problem now, with the kidneys and that. Have you seen that before?

Patrik:   Yeah, very much so. There’s two things that I can see. Number one, the hypotension in ICU might have caused some kidney malfunction. And, if the blood pressure is low, the kidneys don’t get perfused.

Peter:   I know, I’m always worried about that, but they said that they pumped him full of fluids, to keep him … Then they gave him a medicine that brought his pressure up.

Peter:    I forget the name of it. Oh, Ephederine and Norephederine

Peter:   Yeah, I remember seeing that hanging on the bag.

Peter:  I always watch every time they hang a medicine.

Peter:  I always read the labels.

Patrik:   Good. So, that might have been enough to get him into renal failure, by having a low blood pressure, for a period of time. It’s one of the biggest sort of … Well, not complications, but it’s one of … It happens in ICU all the time, that patients, many patients in ICU in fact, have kidney issues during their ICU stay, because of hypotension, right? It’s nothing unusual.

The furosemide on top of that … Sometimes the furosemide works brilliantly, and sometimes it’s aggravating the kidney failure, yeah. So it’s a bit of a Catch-22.

So, to answer your question, have I seen this before? Definitely, yes.

Peter:   Even when …? What do you see in this thing? I’m trying to get a nephrologist in here, that would intercede.

Peter:   That’s what I’m trying to find out, you know, how to help him. Is there any medications or any treatments I can get, to try and give the kidneys a kick-start?

Patrik:   Yeah. So how much furosemide have they given him? Did you say 5 milligram?

Patrik:    How much furosemide have they given him? Do you know?

Patrik:    The furosemide is the Lasix. Sorry, the Lasix.

Patrik:   Right. Sorry, how much did you say?

Peter:   That’s why I was worried about it. They were worried about that too, when he didn’t make a lot of urine, because of the …

Patrik:   Yeah, look. Right, there is a good chance that 40 was not enough. Maybe they have to try 80 or even 120. If that doesn’t work, then the next step is to get him on dialysis. Now, with the dialysis, many patients-

Peter:    Wouldn’t that inhibit the … One thing I learned in dialysis is that sometimes when you start that, then the body forgets to use the organ, the kidneys, and then they don’t …

Patrik:   Right. I can assure that 90 … There’s some research out there, 90% to 95% of patients who need dialysis as part of their ICU stay, their kidneys fully recover.

Peter:   So what happens? The kidneys just get tired, or …?

Patrik:   No. What happens is, as I said, with the hypotension, the kidneys shut down temporarily.

Peter:   Heart rate’s been good, and-

Patrik:   Yeah, but I can tell you that the short period of time in ICU with hypotension, can be enough to set off renal failure. Can be enough. It doesn’t..

Peter:    That’s what I just … That’s what I worry about with him, but I just wondered about … I want to protect his kidneys here.

Peter:  I mean, should I be … They also switched his drink back. That reminds me too, they doubled his flow rate on his food, and they stopped, and they started getting this big residual, and then they had to stop it all together. Now they’re going back the old rate, 40 ccs an hour.

Peter:   Same with the feeding stuff. The feeding tube and stuff, so …

Peter:  I don’t know, he’s … Believe it or not though, he’s starting to wake up a little bit now.

Peter:    Jesus. I had a feeling this would happen, too. I said even to my brother and mother. I said, “Watch this, now. He’ll be coming from a pneumonia, but now he’ll have a kidney problem now,” and then the doctor telling me last night, “Oh, you didn’t know he had stage-three renal …?” What do you call it? Renal disease.

Patrik:   Yeah, but I think … Look, in order to diagnose stage three renal disease, they would really have to get a nephrologist in. Now, I would say that about a good 30% of people in ICU probably end up with some sort of kidney disease during their hospital stay, but that again, that doesn’t mean that people end up on dialysis for the rest of their lives, you know? It’s a matter of treating that.

Peter:    So at what point will they …? His crea is 2.-something now. At what point do they usually push, wheel him down to dialysis? When will that happen?

Peter:   Oh, okay. How does that show up? What test is that?

Patrik:   It’s a blood test. It usually shows up with the creatinine. It’s usually mentioned at the same time.

Peter:   What is that? That seems to be elevated, ever since he’s been on the feeding tubes.

Peter:   And when he’s off the feeding tube, it seems it usually comes down to the 20s, but …

Peter:    Anyway, so that’s why I called you, because I was concerned about what I should push for here, or should I wait, and see what happens.

Patrik:   Yeah, yeah. So if in the next 24 hours, if he’s not making any urine, they will need to start him on dialysis, because if they don’t, he will go into pulmonary edema. Have you heard of that?

Peter:   Yeah, yes, because they worried about that when he in … He has also the diastolic CHF, they told me, band sometimes that can cause the fluid to back up too, you know?

Peter:   But he’s been pretty clear of that, it hasn’t been really a problem, you know.

Peter:   So they say this fluid is all … and plus, they were going to give him albumin.

Peter:    They say that would help draw the water from his tissues into his circulation-

Peter:    But now they’re holding that, because he’s not making any urine. I guess they don’t maybe want to overload his circulation, right?

Patrik:   Yeah, that’s exactly right. If they gave him albumin, and he’s not making urine, that could cause trouble. That could get him into pulmonary edema relatively quickly, especially with-

Patrik:   … Especially with his heart-

Peter:   …Now if the.., is the medicine to blame for this? The … What’s it called? The Lasix? Is that typically the cause of this type of thing?

Patrik:   No, it’s usually a combination of the hypotension and … Has your dad been on Lasix before? Do you know?

PODCAST: The Doctors asked us to stop treatment, but I gave my father in ICU a chance instead!

The ICU team is not following the policy regarding the treatment protocols for my mother. How can I respond to this?

What are the chances of survival after a tracheostomy?

I don’t think the ICU wants to help my mother to fully recover and get off the ventilator. How can I find out?

My Dad is still in a coma after bypass surgery, what could be the reason for him not waking up? (Part 2) 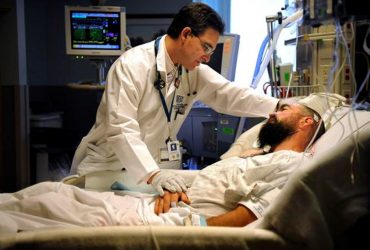