YOUR INTENSIVE CARE HOTLINE - Quick Tip for Families in ICU: 5 Reasons Why Your Loved One Isn’t Waking Up After an Induced Coma

Hi, it’s Patrik Hutzel from me intensivecarehotline.com with another quick tip for families in intensive care.

So number one, first and foremost, the most important reason why your loved one is not waking up is simply because they have a brain injury, they have a stroke, or they have any other neurological conditions such as seizures, where they also get an anti-seizure medication, which often has a sedative effect.

But the most important reason why patients do not wake up after an induced coma is simply a brain injury that comes, as I said, in a form of traumatic brain injury, stroke, bleeding in the brain, seizures.

Number two reason why there is a delay in waking up after an induced coma is simply the sedation your loved one is getting. So let’s look at long-term versus short-term sedative.a form o

So short-term sedative in ICU is usually something like propofol and propofol is a sedative, when you switch it off, a patient should quickly wake up as long as there’s no brain injury.

For long-term induced coma, often a sedative is used with the name of midazolam also known as versed. Versed is a benzodiazepine and it’s a long-term sedative. Therefore, it stays in the body system longer and depending on the amount of versed or midazolam being given, there simply can be a delay.

And also when there are opiates being given such as fentanyl or morphine in high doses, there’s often also a delay in waking up.

Then number three reason is simply, paralyzing agents. So often on top of long-term sedation such as midazolam or opiates such as fentanyl or morphine, that could also be, paralyzing agents being given, for example, if your loved one has ARDS and can’t be ventilated, then often a patient needs to be paralyzed.

Then on top of that, there needs to be long-term sedatives being given such as midazolam plus the opiates. So again, there could be a significant delay there as well.

So for example, for kidney failure, you could treat that with dialysis. But liver failure is much more difficult to treat.

Sometimes, patients can be in ICU for many days, many weeks and even though they may be off sedation and off paralyzing agents, simply the nature of the critical illness, patients need time to recover and they just take the time by being asleep and by not waking up. So sometimes it just takes time.

So that is my quick tip for today. We have more resources on our website, such as many case studies.

If you want a one-on-one phone or Skype or zoom consulting with me, go and check out our website.

Give me a call on one of the numbers on the top of the website, comment down below what questions you have.

This is Patrik Hutzel from intensivecarehotline.com and I’ll talk to you in a few days.

Quick tip for families in ICU: You are 100% in control of how you respond to the challenges!

Quick Tip for Families in ICU. How Long to Regain Consciousness After a Hemorrhagic Stroke?

Quick Tip: Has a CT Brain Been Done If Your Loved One Hasn’t Woken Up After an Induced Coma?

Quick Tip for Families in ICU: What’s the Difference Between a Coma & Sedation After a Brain Bleed?

Quick Tip for Families in Intensive care: Can Someone With a DNR Have a Breathing Tube? 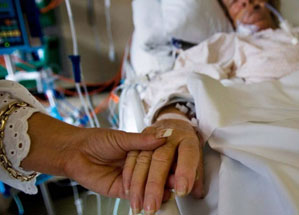