YOUR INTENSIVE CARE HOTLINE - How Can My Critically Ill Mom Wean Off From ECMO in the ICU?

Your Questions Answered Live: How to treat COVID-19 ARDS/Lung failure in ICU!

In this week’s episode of “YOUR QUESTIONS ANSWERED”  I want to answer questions from one of my clients Juan, as part of my 1:1 consulting and advocacy service!  Juan’s mom is with a tracheostomy, IABP, and is on ECMO. Juan asks how his critically ill mom be able to successfully wean off from ECMO after a heart attack.

How Can My Critically Ill Mom Wean Off From ECMO in the ICU? 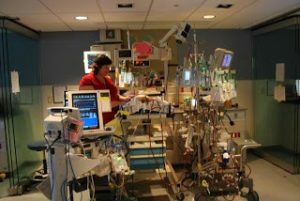 Patrik: Hey, Juan. Can you hear me?

Patrik:  Hey, Juan. It’s Patrik here. How are you?

Patrik:  I’m very well, thank you. This is a good time?

Juan: Yes, this is a good time. I have Michelle and Kevin here with me.

Patrik: Hi, Michelle. Hi, Kevin. How are you?

Patrik:  Go on. What burning questions do you have to begin with?

Juan: So I guess, yeah. We’ve shared sort of the overall status.

Juan:  We’re kind of at a, I don’t know, potentially a turning point, but I mean, we’re cautiously optimistic in that sense because things have rapidly changed multiple times. As of now, she’s still on three to four machines. She’s on maximum support. I think we’re wondering how to go about weaning off the machines and balancing that with obviously being careful, but also understanding that she’s on extreme support for a while now.

Patrik: Yes, of course. How many days ECMO?

Juan:  It’s been 14 days since the VA-ECMO. It’s been probably seven days with it being VAV-ECMO, and it’s been one day with VVA.

Juan:  She did. So we came to hospital because we suspected that she had a heart attack.

Juan:  That was exactly about a month ago on mid-July. So when we arrived and they took her in, and they did an angiogram, they found that she had a heart attack probably the night before or that morning. And actually about 20 years ago, she’d had an angioplasty and she already had three stents in her heart, from almost 20 years ago.

Patrik:  Right. And now they stented it again.

Juan:  They stented the LED.

Juan:   They found three other blockages in three of the arteries. The old stents essentially were blocked, but they said they would have liked to do a bypass, but obviously that wasn’t a question given her weak state.

Juan:  Because of the COVID and issues and her lungs were quite damaged. So she had to be put on a ventilator immediately after the procedure.

Patrik:  Right. How old is your mom?

Patrik:  Right. And any other pre-medical history?

Juan: Not really. I think the heart is the main issue.

Kevin: Just the heart and hypertension and…

Kevin: She’s not particularly healthy and fit. She leads a very stressful lifestyle. She’s a workaholic.

Kevin:  Doesn’t exercise frequently. She had habits that are too bad and the lifestyle such as the high stress environment and generally that.

Patrik:  Right. Okay. But no diabetes.

Kevin:  Not before, but I guess now they’ve been… I mean, now during the procedure they’ve been mentioning it, but they haven’t really made a big deal out of it.

Juan:  So, we’ve known her to be diabetic before this experience.

Patrik: Okay. Lot of patients in ICU go on insulin even though they’re not diabetic.

Juan:   She’s not on any insulin right now.

Patrik:  Okay. Fair enough. Okay. Sticking with the heart for the moment. So you are saying her ejection fraction was down to 20% at some point.

Kevin:  When she came in.

Kevin:  Between 30 and 35. They also attribute the increase to the supports because she’s on VA-ECMO.

Kevin:   and IABP or Intra- Aortic Balloon Pump. She was on some inotropes before.

Patrik:  That was my next question. So she’s on ECMO and IABP.

Juan:  That’s right. So they had tried to wean off the VA-ECMO. They were trying that the whole week actually, the VAV, but she would desaturate and her BP was falling. So they needed to preemptively insert the IABP, which they had actually put in right when she came in. She had it in for four days, when she first was admitted, and then they took it out. So I think day before yesterday, they inserted the IABP again.

Kevin:  They added the IABP before they were going to try weaning her off the VAV. So they added the IABP the day before yesterday. And suddenly, the blood pressure increased quite a bit, and they could come off the inotropes completely. In fact, now she’s on the IABP and the ECMO, the VA, which they’ve switched to a VVA. Her blood pressure is being maintained around 120, along with the sodium nitroprusside.

Patrik: Yes. I saw that. It’s always been hypertensive, if anything. When she was on inotropes, do you know what she was on?

Kevin: But prior to that, it was a bit higher. It was 0.4 of Noradrenaline, and about 0.3 of vasopressin.

Patrik:  Right. No Dobutamine, no Dopamine or Milrinone as far as you’re aware.

Kevin:  None of that.

Patrik: Okay. Fair enough. Okay. And have any weaning studies being done?

Juan:  Regarding the weaning studies, we’ll have to ask them again, exactly when they did one. As of today, they didn’t really say they had done one today, or yesterday.

Patrik: Okay. It’s a bit unusual. I haven’t really seen someone on VA-ECMO with sodium nitroprusside. That’s unusual in my experience, but I don’t see that as a negative at the moment. I mean, if anything, patients are usually hypotensive, not hypertensive. So that’s not necessarily a bad thing. Is she on any Heparin?

Patrik:  500 units an hour. Probably while she’s on ECMO.

Michelle:  That’s also because she’s on so many machines.

Michelle: So they don’t want any clotting in the machine.

Patrik: Oh, absolutely. Absolutely. But I mean, the heparin is necessary. Just remind me again, how long has the balloon been in?

Michelle: One to two days.

Patrik: About 92 kilos. Okay. I’m just quickly looking up. I’m just bringing up the picture of the balloon. So she’s on one and one. Do you know a little bit about the balloon?

Juan:  Yes. They’ve explained it to us a little bit.

Patrik:  The reason I’m asking is, she’s on one and one. So it means every time the heart beats, she’s also getting the balloon. One way to wean off the balloon is to put it to one to two and then to one to three. Yeah. What-

Juan:  The VA would come off first, then the VV. No?

Patrik:  Yeah. Look, it is but very rarely have I seen… What I’ve seen from my experience is, balloon first. If the balloon doesn’t work, go on ECMO, but I haven’t seen as part of the weaning, that people go on a balloon, back on the balloon when-

Juan:  I think the balloon situation surprised them, so they put it in prophylactically because they thought that her BP would drop once they wean, hence they tried to remove the arterial cannula. But then when her BP went up, they actually mentioned to us that she’s kind of performing better without the balloon, but they just put it in, so it’s not like they could take it out immediately either.

Juan:  I think it’s a bit of a strange situation. They’ve mentioned a few times that she’s doing some unexpected things and taking them by surprise.

Patrik:  Right. Right. Okay. Yeah. I haven’t really seen that. I have seen balloon after heart attack. And then if the balloon is not sufficient, then you go onto ECMO. I have not seen the sequence where you’re putting the balloon back in to wean off VA-ECMO. I haven’t seen that in my experience.

Juan: So initially when she came in and then they put the balloon in for four days, and then they took it out, she was improving.

Juan: And actually two weeks ago, suddenly, we suspected that and it was triggered by the blood transfusion. And then she rapidly desaturated. That was the night she was on her way to recover actually getting on ventilator potentially very rapidly. That’s the night they had just quickly put her on the ECMO.

Juan: The VA-ECMO because that just took everyone by surprise. And then I guess weaning her…

Kevin:  It’s also because she picked up some bugs in there. Some fungal infections, some…

Kevin: A bunch of things. ICU induced bugs or whatever.

Patrik:  Right. That was my next question. Does she have an infection besides the COVID?

Kevin:  So now everything seems to have settled, but when she desaturated right before they put her on the ECMO, she had about two or three bugs, fungal bugs. If you had heavy congestion and things of that sort.

Patrik:  Right. Okay. Coming to the COVID or coming to the lung infection as such, does she have tracheostomy?

Kevin:  Yes, she has a tracheostomy.

Patrik: How long ago has she had the tracheostomy?

Why the ICU Team Suggests Euthanasia For My Brother? HELP!

My Dad is in ICU on a Ventilator with Tracheostomy. Is it True that My Dad Can Go Home with Services like Intensive Care at Home?

The ICU Team Wants to Do Tracheostomy and PEG insertion for my Mom in ICU. Isn’t it too Much for Her Condition? Help!

What Would Be My Sister’s Quality of Life After Being on a Ventilator in ICU?

Why is the ICU Team Pushing My Critically Ill Dad Out of the ICU Too Soon? 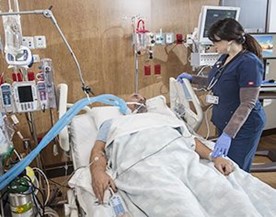 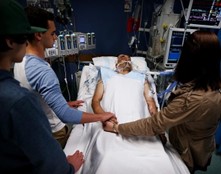 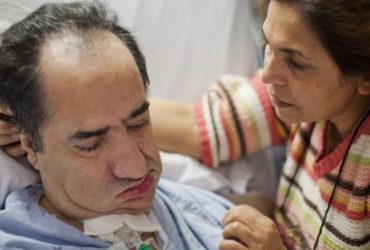