Hi, it’s Patrik Hutzel from intensivecarehotline.com where we instantly improve the lives for families of critically ill patients in intensive care, so that you can make informed decisions, have peace of mind, real power, real control when you have a loved one in intensive care.

So in today’s quick tip and also case study, I want to quickly talk about a client we worked with over the last few weeks. So the client has her 46-year old sister in intensive care. She initially was diagnosed in May, 2021 with COVID . She ended up in ICU and then ended up in severe respiratory failure like many COVID patients ended up in ICU with ARDS and respiratory failure . In the meantime, she was also diagnosed with lupus. She was then diagnosed, with lung fibrosis and she was very sick and still is very sick in ICU.

The intensive care team by mid-September wanted to push for end-of-life care, had palliative care involved. And, was saying to the family that her condition is unsurvivable, that she should be a DNR and that palliative care should get involved. And that a, “one-way extubation” should be done where the breathing tube was removed and then the patient would inevitably pass away, especially with the underlying lung fibrosis.

The family then contacted us, must’ve been around mid-September and we said, okay, well, she’s 46, she’s very young. Why has ECMO not been considered as an option? At this stage, the family had no idea that ECMO might even be an option. At that stage, the family has not had access to medical records and was kept at arm’s length really by the intensive care team without making things transparent with them.

So then we started obviously talking to the family, started talking to the intensive care team. It actually turned out that an initial referral to ECMO was made, but the ECMO team in another hospital refused the referral saying that she was not a candidate for ECMO. But the family didn’t know anything about that. That was never transparently communicated to the family that ECMO might be an option, that a referral has been sought and so forth.

We then proceeded and looked at medical records, talked to the intensive care team. It turned out that the patient was on very high doses of morphine and midazolam that kept her sedated to a point where the ICU team couldn’t really ask her, the patient, what she would want.

Now, again, the intensive care team disputed that and said, look, she will die in the next few days. We had a meeting with the intensive care team again, must’ve been around mid-September, where the intensive care team was saying, “Your loved one will inevitably die. She’s only got a few days to live!”, whilst they were heavily sedating her. And we said, well, why don’t you take sedation  off so she can wake up and see what she wants and, take the patient’s wishes into account. And that’s not a novel concept, is it?

So then we educated the family around the possibility of a tracheostomy. The intensive care team, again said that tracheostomy is not an option. It’s not “in the patient’s best interest”. And again, we were advocating saying, maybe a tracheostomy may prolong the life and maybe that is what the patient wants. And the discussions were ongoing. The intensive care team was trying to set up an ethics meeting, a “best interest meeting”. All the while saying that the patient will inevitably die. And at that stage, we were only talking about single organ failure. The lungs were failing and, but no other organs were failing. The heart was strong, no inotropes, the kidneys were working. There was no sepsis . So everything was stable with single organ failure.

Now, by the time of this recording, we are mid-November 2021 and just yesterday, the client finally had a tracheostomy and that is such an amazing outcome, with the hospital trying to push for end-of-life, with palliative care, trying to push for end-of-life. And the family never gave up. And with our advice, we looked at medical records, we prompted the intensive care team to look at, doing other tests. Should they do a bronchoscopy? Should they do another CT scan of the chest? And just asking all the right questions that came out of a medical record review that we’ve done and making it transparent for the family as well. Because like with anything, intensive care teams often only tell you half of the story. They’re often withholding critical information, which you can get from having access to the medical records. And if you are the next of kin, the legal guardian, the medical power of attorney, you have a right to access medical records. And then we can help you with looking at those medical records and interpreting crucial, intensive care information that otherwise would be difficult for you to make sense of.

So it’s a really great outcome for this family, for a 46-year old lady. She’s got four kids and she just had her first grandchild. She’s got every reason to live and yes, she may have, not the best quality of life with a tracheostomy going forward, but she wants to live and she wants to be around her kids. And that is a basic human right. It’s not up to intensive care teams to decide who should live. And in what condition, if people have the capacity, the mental capacity to make their own decision.

So that’s my quick tip and case study for today.

If you have a loved one in intensive care, go and check out intensivecarehotline.com and call us on one of the numbers on the top of our website. Subscribe to my YouTube channel. Like this video, click the notification bell, comment below what questions or insights you have from this video and I will talk to you very soon.

This is Patrik Hutzel from intensivecarehotline.com and I’ll talk to you in a few days.

Quick Tip for Families in Intensive care: Can Someone With a DNR Have a Breathing Tube?

Quick Tip for Families in ICU: When Is a Tracheostomy Inevitable?

Quick Tip for Families in ICU: Is Day Five in ICU too Early to Stop Treatment?

Quick Tip for Families in ICU: Tracheostomy and Intensive Care at Home!

Quick Tip for Families in Intensive Care: COVID-19 and ARDS, When is ECMO an Option? 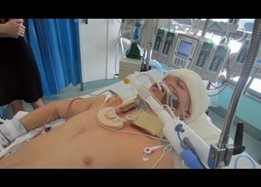